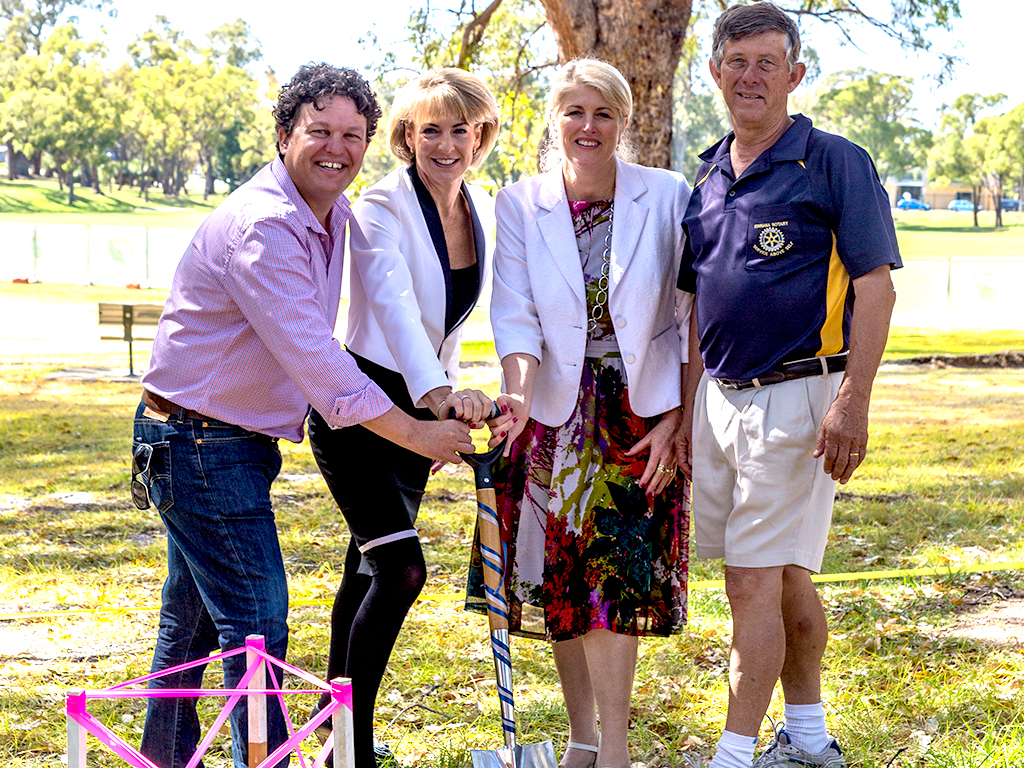 Josh Byrne & Associates’ (JBA) team members Josh Byrne & Morgan Gillham were on site for the ‘Turning of the Sod’ that officially announced the commencement of works on the Kwinana Adventure Playground.

The $5.2 million adventure playground project is due for completion in late 2016 and will be a go-to destination for the south-metropolitan region that features a wide variety or universally accessible play and recreational areas. The Kwinana Rotary Club driven initiative includes funding from federal and local government.

The JBA design team assisted by Jeavons Landscape Architects, Civil Engineers – Tabec, Electrical Engineers – Best Consultants, Traffic Engineers – DVC and expert arborists from the Arbor Centre have been working closely with Dana Eidsvold from the City of Kwinana to design a unique facility that utilises many of  the original concept ideas developed by Fiona Robbé from Architects of Arcadia. Fiona and her team conducted the initial community consultation with  feedback forming the basis of the original concepts.

JBA are now working as the superintendents with the Head Contractor – Environmental Industries to deliver a project that integrates with the topography and natural features of the existing site. This design approach reduces the need for tree clearing and opens up opportunities for natural shade. Hundreds of salvaged Jarrah poles and large Tuart & Marri logs from local land clearing that would normally have been mulched are going to be used within the project, which is in line with JBA’s strong environmental design policies.

The Kwinana Adventure Playground will feature a main play structure that winds its way up and amongst the existing large Jarrah and Marri trees that are a feature of the site.  The facility also includes a toddler area for younger children, a splash pad with universally accessible shower, toilet and changing rooms, as well as a hireable entertainment facility currently known as ‘The Hub’. The extensive playspace will include climbing structures, flying fox, musical instruments, slides and a wide variety of other play elements for all ages and abilities.

As well as acting as the co-landscape architects for this project JBA conducted storm water infiltration analysis. This work increased JBA’s understanding of the site and strengthens the overall project design.

For other JBA playspace projects have a look at JBA’s Landscape Architecture page, check out our current work in Kellerberrin and Bunbury, or have a look at our award winning project in Yallingup.